04 Jun A Mother’s Book Is Her Son’s Movie

A Mother’s Book Is Her Son’s Movie 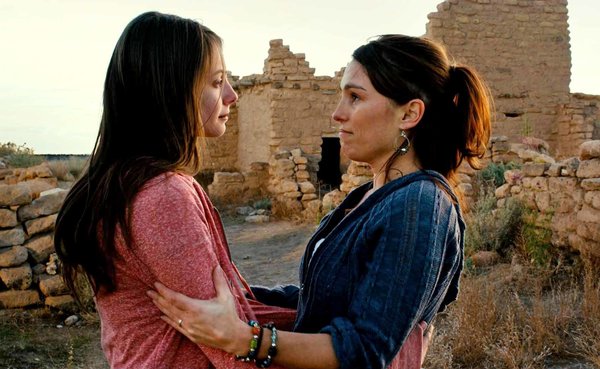 “It’s a view with a room — now you’ve seen it,” Judy Blume said, smiling and pulling shut the shade in her apartment overlooking Central Park West. It was morning and still bright inside her living room, done in soft colors and wood, with stuffed bookshelves and unpretentious modern art. Over the sofa hung a tasteful assemblage of female nudes. (Some were painted by a friend, Lincoln Perry, who is married to the author Ann Beattie. “But that is not Ann,” Ms. Blume noted.) 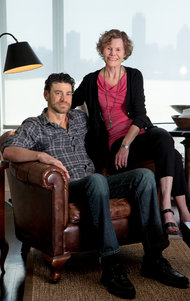 The novelist Judy Blume with her son, Lawrence.

It was decorated by other friends, the design team Roman and Williams, a k a Robin Standefer and Stephen Alesch, who have done outposts of hip like the Ace Hotel, but who got their start as decorators on movies. “We said, ‘We want to live on a Robin and Stephen movie set,’ ” Ms. Blume said cheerily.

Ms. Blume, the beloved author of young adult and children’s staples like “Are You There, God? It’s Me, Margaret” and “Superfudge,” as well as several popular grown-up novels, is a lifelong film buff. She splits her time between New York and Key West, Fla., where her husband, George Cooper, helped start a nonprofit art house theater, the Tropic Cinema. Ms. Blume has volunteered as a ticket-seller — “I was told I was the slowest person to make change,” she said — and visits regularly for screenings. It’s a habit she has had since childhood in New Jersey, when her parents took her to the movies every week. “And every week I would come home and act out all the parts,” she said.

At 75, she is still that imaginative, and still writing, most visibly on Twitter, where she has a warm and chatty presence. In a career that spans best sellers and banned books, sitcom jokes and celebrity acolytes, Ms. Blume is just now getting to see the first feature film version of her work reach the big screen. The wait has a payoff: the movie, “Tiger Eyes,” based on her 1981 novel of the same name, was directed by her son, Lawrence Blume, 49. Mother and son also wrote the script, and Ms. Blume served as a producer, with Mr. Cooper as executive producer. To her obvious delight, Ms. Blume was involved in most aspects of moviemaking, and stayed on location for the entire 23-day shoot. It arrives on Friday as a download and in more than a dozen theaters around the country.

“This was a real homemade movie,” Mr. Blume said. “There was something about the two of us being next to each other there, every day, that I think the whole crew kind of rallied around.”

Their relationship, as revealed in a joint interview in her apartment, is jokey and casual — she calls him Larry; he calls her Judy — with room for professional understanding.

“We were very nice to each other on the set,” she said. “We’re old enough to decide, ‘We’re going to make this work,’ and we did. And we like each other, anyway.”

The memory of being on location left her with a nonstop smile. “I loved it, I just loved it!” she said, explaining that as a writer, she had missed the bustle of collaboration. “I loved the crafty guy who made me little grilled cheese sandwiches, and who turned out to be one of the best dancers I’ve ever seen or danced with, at our little wrap party. I loved the production designer and going into her office — she had a ratty sofa, and she would let me lay down there, and I would look up at the walls and see all the sketches. I wanted to move in.”

The film was so low-budget that the names on the directors’ chairs were spray-painted. Nonetheless, Ms. Blume took hers home. “It was a once-in-a-lifetime experience for me,” she said.

“Tiger Eyes” is the story of a teenage girl, Davey, whose father is killed at the family convenience store in Atlantic City. In the aftermath, Davey, her distraught mother, and her younger brother move to Los Alamos, N.M., with well-meaning relatives. Ms. Blume, too, took her son and daughter from New Jersey to Los Alamos, after divorcing their father and marrying her second husband, a physicist. Lawrence read the book at 18, and Davey’s fish-out-of-water struggle resonated.

“I still really related to her sense of isolation and trying to figure her life out on her own,” he said. “And I also thought it was very cinematic. I could see it, when I read: the canyons, the locations, the whole thing. I could just see it in my mind’s eye, and I thought, ‘I want to make this into a movie.’ ”

Though over the years various producers and showbiz types came calling, Ms. Blume said, nothing panned out for film. She and her son had worked together on a TV version of “Otherwise Known as Sheila the Great,” for ABC in 1991, and she also had a hand in the 1995-97 series “Fudge.” “That was not a happy experience,” she said. “It was a lot of tears,” because she didn’t think the writing was up to snuff, but had no say over it.

So when money — just over $2 million — came through for a film, Ms. Blume had no doubts: it would be “Tiger Eyes,” directed by her son. They began writing the script in 2009, trading off strengths. “My background was as an editor, so I think structurally,” said Mr. Blume, who has directed one other feature, the 2002 cult comedy “Martin & Orloff.” “And then she’s character and dialogue.”

Ms. Blume said: “I am so not structure. Please don’t talk to me about structure. I’m a natural writer — spontaneous, instinctual.”

But, both added, they did not disagree about trimming the back story. “I’ve never been a writer who is afraid to throw things away,” she said. “That’s not how I work.”

They were shooting in New Mexico a little over a year later. Willa Holland, of “Gossip Girl” and “Arrow,” stars as Davey, and Tatanka Means plays Wolf, the handsome American Indian she meets exploring the canyons. Mr. Means, an actor and comedian, is a son of the American Indian activist Russell Means, who also plays his father, in one of his final on-screen roles (he died last year). For budget and logistical reasons, many other parts were filled by locals….