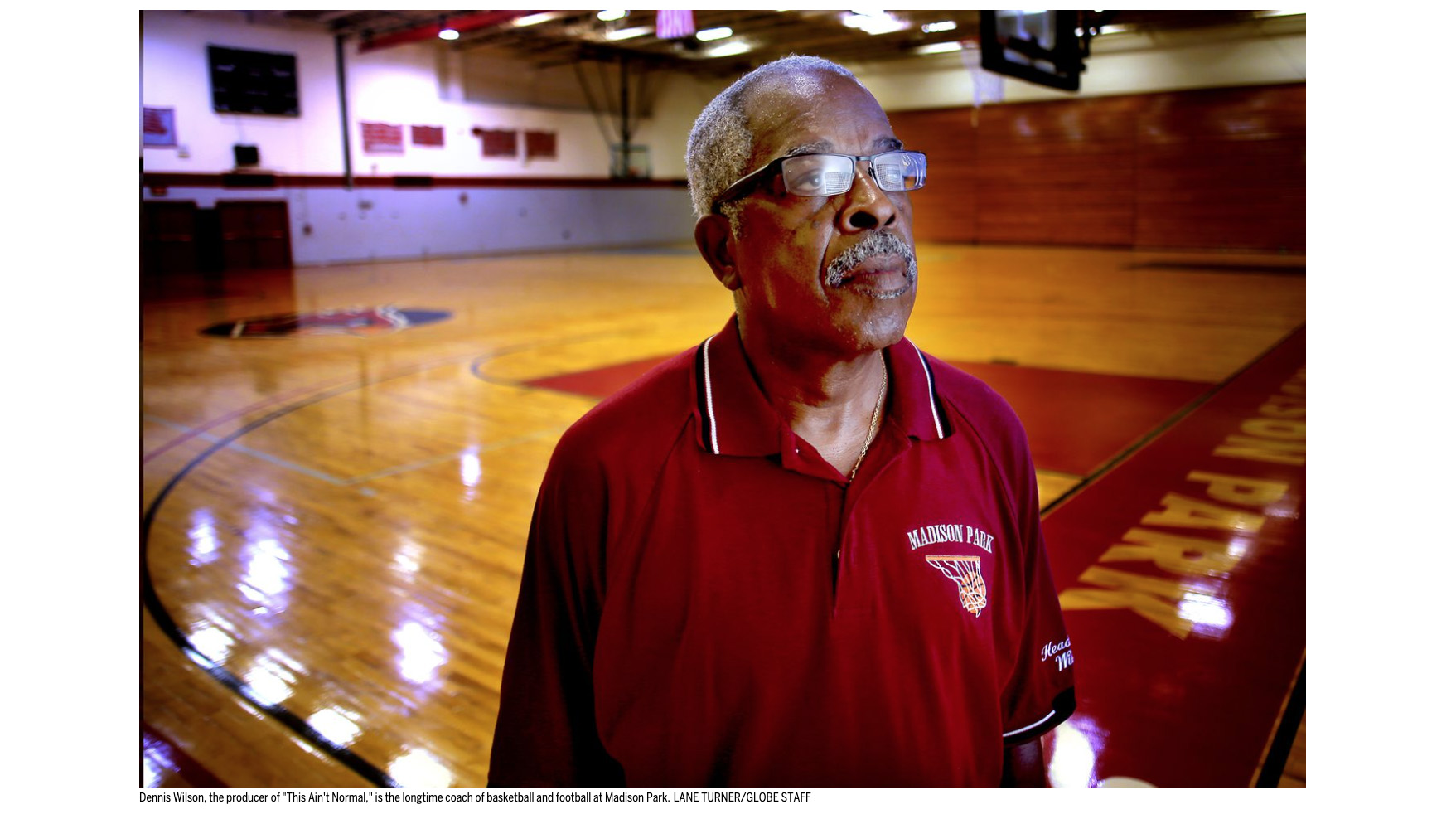 They say they are family, that they will die for each other. And so they do, young men in Boston street gangs who for decades have arrived at hospital emergency rooms, felled by gunfire. Some have worn tattoos that read like commentaries on the social and economic deprivations that have shaped their short lives.

“Dying to be loved.”

“Death is nothing. But to live defeated is to die every day.”

The images are “burned into my consciousness,” Dr. Thea James, the director of Boston Medical Center’s violence intervention advocacy program, says in a penetrating documentary film, “This Ain’t Normal,” about the causes of gang affiliations in Boston and the possible solutions.

The film is produced by Dennis Wilson, an acclaimed history teacher, basketball coach, and football coach at Madison Park Technical Vocational High School in Roxbury, who for 40 years has witnessed and tried to curb the deadly toll of street violence.

Boston Police Commissioner William Gross, a former commander of the department’s gang unit, said in an interview that gun-bearing gangs remain a major factor in the city’s homicides, especially a recent uptick in killings. Gross said he has watched Wilson’s documentary twice and considers it a brutally honest look “at what it means to be in a gang in Boston.”

Wilson said he produced the documentary with a friend, Rudy Hypolite, to shine a light on the systemic and institutional racism they hold responsible for the long reign of Boston’s urban gang culture. Some of Wilson’s former student-athletes are among the dead.

“It’s all about trying to open eyes and save lives,” he said.

Dozens of armed gangs have deep roots in the city, from housing developments in the South End to boulevards and back streets in Roxbury, Dorchester, and Mattapan. A few crews operate sophisticated criminal enterprises, but most are small neighborhood gangs, largely populated by the disenfranchised. Their members are predominantly poor, inadequately educated, often survivors of parental abuse, neglect, and addiction. They generally are devoid of job opportunities and hope, and the vast majority are fatherless, mainly because their fathers experienced similar obstacles.

“Every child needs his pops,” Travis, a fatherless member of Dorchester’s Lucerne Street crew, says in the documentary. The film was shot from 2013-16, completed in 2018, and widely released in 2020.

Gangs become surrogate families for young men like Travis, who lack positive male role models, anti-violence specialists say in the documentary. Guns become life-saving — and life-taking — accessories, and Travis is now locked up in a federal penitentiary for being a felon in possession of a firearm, his prospects for a better future in jeopardy.

‘Ain’t nothing sweet about it’

Millions of dollars have been spent in Boston trying to solve the gang problem. Federal, state, and city governments have mobilized police, courts, schools, and social services. Nonprofit initiatives abound, and clergy have taken to the streets, as they did during the so-called Boston Miracle in the 1990s, when gang and gun violence in the city decreased sharply.

But the underlying problems remain. So, too, the consequences. Territorial disputes are rife, and armed conflict can be triggered by the slightest scent of disrespect. In the documentary, DeAngelo Taldon’s surrogate family is a crew on Greenwood Street in Dorchester, hard by the train tracks that carry commuters home to safer suburbs.

Taldon was 3 years old when his father died of an apparent asthma attack. His aunt, Gloria Weekes, said in an interview that he was raised mostly by his paternal grandmother. By the time Taldon was 18, he became a father to the first of his four children.

Weekes said Taldon loved his sons and daughters and his extended family. Yet he dedicated much of his life to his associates on Greenwood Street.

“I ain’t going to front, I love it,” Taldon says in the documentary of his gang affiliation.

Later in the film, he laments friends he has lost to gunfire.

“It always hurts when somebody you are close to — or just anybody that you know — get killed,” he says. “Ain’t nothing sweet about it.”

Earlier this year, Taldon gained custody of two of his children, aged 15 and 10. His aunt said he was transitioning out of the gang life. He and his children were scheduled to move into an apartment in Chelsea on June 15.

But early on the morning of June 4, Taldon was socializing with friends in a yard on Whitfield Street in Dorchester when they were ambushed by a gunman. One bullet struck Taldon. He was dead at 33.

Taldon’s murder received scant media attention, no more than a few paragraphs in the Globe and other publications.

[Clip from ‘This Ain’t Normal’]

Weekes, a licensed social worker, has long worked with troubled youths in the juvenile justice and mental health systems. She lost another nephew five years ago to random gun violence.

“Another piece of our heart is gone,” Weekes said of Taldon’s death. “He was a young man who made some choices that weren’t in his best interests, some of which he made on his own and some he was forced into.

“But that’s not who he was in his family’s eyes. He was a nephew, a son, a brother, a father, an uncle, a cousin, and he was loved.”

Retaliation is common in gang life. On the afternoon of June 13, nine days after Taldon’s death, 28-year-old Calvin Boykins was shot and killed on Wheatland Avenue, a block from the site of Taldon’s murder. Police have not said whether the cases are connected.

But that’s life on the streets: one senseless death after another.

“I’ve been to too many funerals,” Wilson said. “Things aren’t going to change until we overcome the systemic racism and discrimination that has plagued this country since the first slave ship got here in 1619.”

Wilson has served as a father figure to generations of boys and girls. He has counseled them, motivated them, disciplined them, inspired them. He has rescued some who were in imminent danger from rival gangs. He has visited a former player behind bars, then helped to rebuild his life. Once he granted a fatherless student’s request to walk her down the aisle at her wedding.

“I’m not a miracle worker,” Wilson said, “but I’ve saved more than I have lost.”

Gross arrived in Boston in the 1970s, sent north from his impoverished family’s pig farm in Maryland when he was 11 years old to live with his mother and sisters in Dorchester. He recalled his mother, recognizing his love of football, marching him to Franklin Field to meet Dennis Wilson and his brother Harry, founders and coaches of the Pop Warner Roxbury Raiders.

Gross remembered playing on Raiders teams that went undefeated in 48 games. Harry Wilson, a Marine veteran of the Vietnam War, died last year at 72 after coaching more than 4,000 children. Dennis Wilson, 69, has retired from teaching, but he continues to coach, mostly the boys’ basketball program at Madison Park, whose teams he has guided to more than 400 victories.

For all of Wilson’s victories, Gross said, “his major victory is saving lives, and he just won’t give up.”

Gross said, “I’m very passionate about passing along exactly what Harry and Dennis Wilson taught us: unity in the community.”

“This Ain’t Normal” won an Audience Choice Award at the Orlando Film Festival and has been presented twice at Harvard University, first by the Charles Hamilton Houston Institute for Race and Justice at Harvard Law School, then as part of the Harvard Library’s “Anti-Black Racism Documentary Film Series.”

David Harris, the institute’s managing director, said, “The film is a powerful antidote to the way people think about our young people and our communities. Every elected official should have to see it and ponder and wrestle with its lessons.”

The documentary focuses on Boston street workers — many of them former gang members — who are dedicated to saving lives. Gross described the street workers as largely unheralded heroes of the campaign to curb gang violence.

Armed only with their street credibility, the workers navigate a world where boys learn early to habitually look over their shoulders for possible danger. A member of a Mission Hill crew named Niko says in the documentary that he was 5 years old when he lost his 24-year-old father to street violence. Niko himself is 24 in the film, with a 5-year-old son.

“I just hope history doesn’t repeat itself,” he says, stealing a glance behind him.

The architect of the street worker program, which was originally funded by the Boston Foundation and has since been taken over by the city, is Robert Lewis Jr. He is now the founding president of The BASE, which provides skills and opportunities to student-athletes in the city.

For too long, Lewis suggests in the film, people in power have tried to address the crisis of gangs and guns in Boston with a multitude of diffused resources. He advocates a centralized, comprehensive response that focuses on education, jobs, mental health counseling, and a range of other services.

“There needs to be one collective strategy moving forward,” he says.

Lewis believes a coordinated response to the crisis would be far more urgent if the trauma of young men dying in the streets was not confined to blighted sections of the inner city.

“If this hits white America — white suburban America — policies will change,” Lewis says in the documentary. “Why wait for that to happen? Solve it now.”

Wilson said he sees reasons to hope. As a teenager, he protested the assassination of the Rev. Martin Luther King Jr. in 1968 by rioting in the streets of Roxbury and Dorchester with hundreds of other young Black men and women.

This year, Wilson returned to the streets in Black Lives Matter protests. He said he saw a striking difference this time: White people, many of them young and committed to fostering change, marched shoulder to shoulder through Roxbury with Black men and women, and people of other races and ethnicities.

“We have a long way to go,” Wilson said. “But when I see everyone banding together to call for action, I believe this can be more than a moment. It can be a movement that makes a difference.”

“This Ain’t Normal” can be found on Apple, GooglePlay, and other digital platforms.