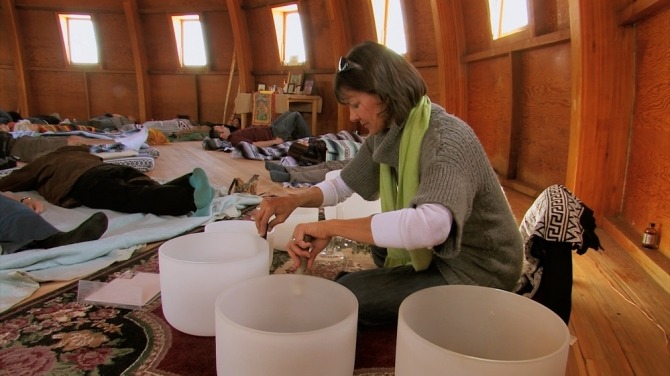 03 Aug Calling All Earthlings Changes The Course of Time

Posted at 19:21h in News by Michael Hetnal

Mystery, murder and meditation meet aliens, federal agents and time travel in Calling All Earthlings. The documentary follows George Van Tassel, who mixed alien intelligence with the writings of inventor Nikola Tesla to come up with The Integratron, a time machine powered by electromagnetic energy. The documentary opens with a collage of witnesses testifying to strange lights, craft, and creatures with glowing red eyes, and then gets weird.

Tassel was far ahead of his time, both technologically and socially. He started a spiritual UFO cult which was stalked by busybodies worried about chants of love, peace and prosperity, while the FBI worked to infiltrate and influence the Integratron intelligentsia against their communistic ideas about free energy. Jack Parsons, the black magic rocket scientist who worked with the Great Beast Aleister Crowley and L. Ron Hubbard, explored free love as part of rocketry’s Suicide Club. But offering free energy proves more dangerous than a Babalon Working for Tassel.

Tassel was a former aircraft mechanic and inspector. He opened a small airport and cafe in the desert town of Landers, California, where some good smoke was being puffed, according to one of the locals interviewed. He set up shop next to a big rock considered sacred by Native Americans.