Posted at 20:19h in News by Michael Hetnal 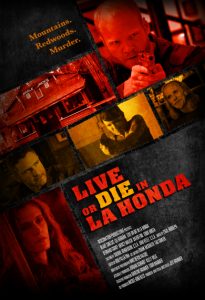 The trailer for film noir crime drama Live or Die in La Honda, which you can watch below, looks moody and mysterious. That bodes well for its upcoming release.

Live or Die in La Honda tells the story of Blake Baker, a Marine who has adjusted to civilian life when he receives a phone call from Victoria “Vic” Taylor, a past lover and fellow Marine who served with him. Vic asks Blake to come to the town of La Honda, California to help find her missing brother.

Once in La Honda, Blake discovers that Vic’s brother ran afoul with a Mexican cartel. Blake confronts Vic about his discovery, and she confesses her real motive. She wants someone to help her exact retribution, and Blake is forced to decide how much he’s willing to risk for the love of his life.

The film debuts on VOD and will be available to rent and own on digital HD across U.S. cable, internet, and satellite platforms through Freestyle Digital Media, independent film distributer, on March 13, 2018.

Watch the trailer below. More information is available at the official film site.