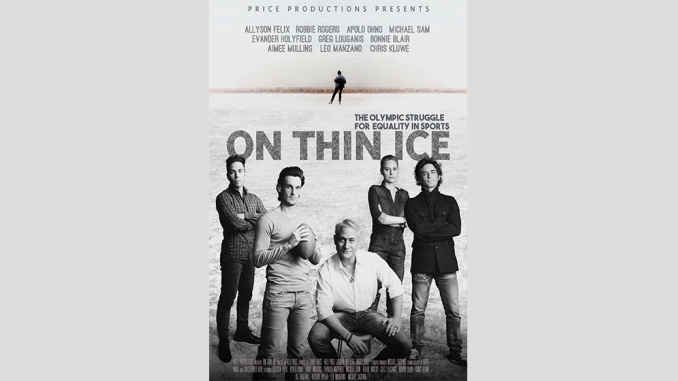 Freestyle Digital Media has secured the North American distrubtuion rights to On Thin Ice, a social justice-themed sports documentary featuring athletes Allyson Felix, Evander Holyfield, Robbie Rogers, Apolo Ohno, Michael Sam, Aimee Mullins, and Greg Louganis. Directed by Keli Price, the film will be available to rent and own on February 2. The doc calls attention to athletes who have struggled for acceptance due to race, religion, sexual orientation, and other prejudices. The film chronicles the life of filmmaker Keli Price’s Great-grandfather Jack Brooks, who escaped the anti-Jewish pogroms in Eastern Europe in 1923 and went on to become one of the premier speed skaters of interwar America. He skated with the U.S. Olympic team, and traveled to Lake Placid in 1932 for the III Olympic Winter Games. But his dream was cut short. Singled out because of the religion he practiced and the place he called home, the “speedster from Poland” became a spectator on the sidelines. This is the story of his life, and the lives of the men and women who came after him. This is a testament to their collective fight for fairness, and to the abiding spirit that sport can and should advance greater understanding of ourselves and each other. Price produced under his Price Productions banner, along with Jamie Brooks Price, Jordan Meltzer, and Nikko Price. Michael Skolnik served as executive producer. Freestyle Digital’s director of acquisitions, Caleb Ward, and Price negotiated the deal.

Freestyle Digital also has the North American rights to the horror film, The Canyonlands, written and directed by Brendan Devane. The pic is slated to be released in theaters on March 5 and will be available to rent and own on March 9. Starring Stephanie Barkley, Marqus Bobesich, Wayne Charles Baker, Dennis Connors, and Sheldon Brown, the drama centers around Lauren (Barkley), a river guide in southeastern Utah, who has been experiencing disturbing visions lately. Reluctantly agreeing to take five contest winners on an overnight trip down to Colorado, she soon finds herself struggling to keep it together with the visions. Camping for the night, the group becomes separated and lost in the labyrinth of canyons and discovers they aren’t alone in the remote terrain. Stalked by an evil presence, Lauren and her guests are thrown into a 150-year-old feud, and Lauren must confront her visions to see the contest winners – and herself – through until morning. Devane also produced the film via Sadieland Production. Caleb Ward, Freestyle Digital’s director of acquisitions, brokered the acquisition deal with Glen Reynolds of Circus Road Films on behalf of the filmmakers.