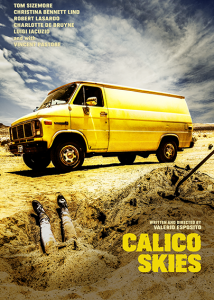 Self condemned to the immense and boundless prison of the Mojave desert, Phoenix leads a life of forced isolation, living by himself in a house as far away as possible from the rest of the world. Phoenix does one thing and one thing only: he digs holes. Every month he digs a hole in the middle of nowhere and buries something. The last stronghold of society stands with the man that frequently delivers his mail. When one day the delivery doesn't happen by the hand of his trustworthy mailman, but by that of the beautiful and quizzical Ariel, Phoenix's life derails in an escalation that leads him to dangerous consequences which will be impossible to escape.