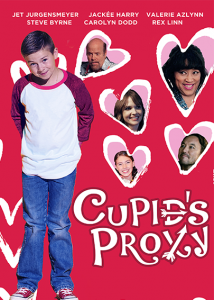 Rebecca Murphy is a cynical, down-on-love widow whose whole world revolves around her son, Justin, 12, a budding musician who can't remember his late father. Rebecca has no desire to date despite efforts by her feisty neighbor, Olive, who has a love advice column called Call Me Cupid. When Olive is pressured by her editor to get with the times, she enlists Justin to help her answer a letter. Unbeknownst to Justin, she publishes his advice under the alter ego, Cupid's Proxy. Justin goes ballistic until Olive makes him a deal he can't refuse. When Call Me Cupid receives a letter from someone who can only be Justin's guitar teacher, Stewart, Justin springs into action. He creates yet another alter ego even Olive doesn't know about in an attempt to get Stewart together with his mother. When his plans come crashing down, Justin has to come clean to both his mother and Stewart. Will all his efforts be in vain or will Rebecca finally decide to take another chance on love?