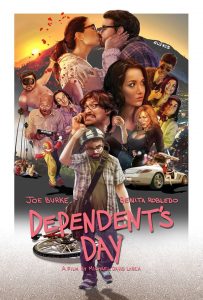 Claimed as a 'dependent' by his successful bread-winning girlfriend Alice, Cam struggles to prove himself as he stumbles through different jobs and life's obstacles in the hopes to live out his Hollywood dream and finally rise to the occasion. "Dependent's Day" is a hilarious, heartfelt, authentic relationship comedy about the adventures of being in love and making it work.