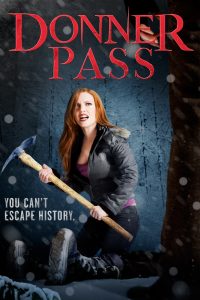 In 1846, in the Sierra Nevada Mountains in the area known as Donner Pass, a starving man kills three others to eat their flesh during the winter, but a boy witnesses the murders and flees. In the present days, the teenagers Kayley, her boyfriend Mike, her cousin Nicole and the outcast Thomas travel to the house in Donner Pass of Thomas's parents that are in Europe. Thomas recommends his friends to be careful with the house since his parents do not know that they are spending the weekend there. They learn that the police are hunting down the criminal James Michael Epstein. Out of the blue, the troublemaker boyfriend of Nicole, Derek, comes with his friends Brody, Valerie and A.J. in his SUV to stay with Nicole, despite the protests of Thomas. Soon their beer runs out and Brody drives the SUV to buy some more in the town. Brody goes missing and soon Mike, Kayley and Thomes find his body eaten. Meanwhile Valerie is murdered near the house and the car has flat tires. Who might be the cannibal that is attacking the group?