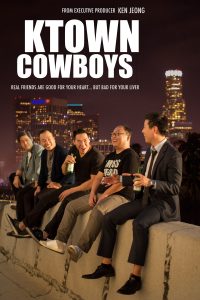 Based on the wildly successful web-series of the same name, KTOWN COWBOYS is a bro-mantic dramedy that follows a group of ball-busting, hard-partying friends wrestling with their evolution into adulthood. As their individual struggles come to light, the group of friends band together in Koreatown and through late nights at seedy after-hour soju bars, karaoke drinking girls and even a stint in jail, each emerges as a better version of himself.