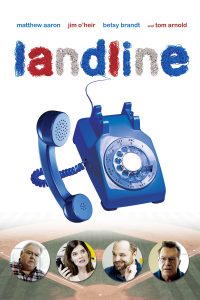 Set in Manhattan in 1995, LANDLINE follows three women in one family having lots of sex, drugs, and Japanese food. Navigating monogamy, honesty, and a long-lost New York, the Jacobs family lives in the last days when people still didn't have cell phones and still did smoke inside. Teenage Ali discovers her dad's affair, her older sister Dana uncovers her own wild side, and their mother Pat grapples with the truth that she can't have it all, but her family still has each other. For a generation raised on divorce and wall-to-wall carpeting, LANDLINE is an honest comedy about what happens when sisters become friends and parents become humans.