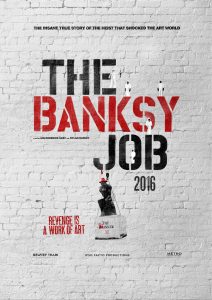 March 2004. The artist known as Banksy illegally erects a ten-foot statue in a small square off Shaftsbury Avenue in central London. Titled 'The Drinker', this sculpture is a replica of Rodin's 'The Thinker' - with a traffic cone placed on its head. The only clue as to who put it there is a stencil on the plinth that merely says 'Banksy'. Then, one day, in broad daylight, masked thieves pull up with a flatbed truck and cart 'The Drinker' away - a reporter from a national newspaper receives a ransom note from a man calling himself AK47, claiming to represent a group of 'art terrorists' calling themselves 'ART KAIDA' After several years back and forth between the media, Banksy and Art Kaida, it is alleged that the artist called Banksy 'arranged' for the statue to be destroyed by any means necessary... Now, after all this time, it seems that AK47 is about to breathe new life into the saga.