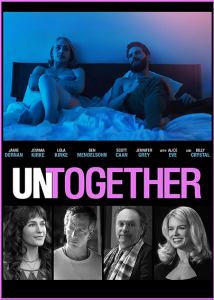 UNTOGETHER is the story of Nick (Jamie Dornan) and Andrea (Jemima Kirke) whose one night stand evolves into something more, though the exact parameters are blurry and undefined. He is a doctor and author whose heroics in the Middle East gained him international fame. She is a writing prodigy fully consumed with destructive vices, navigating Los Angeles without a driver’s license or credit card and sharing a home with her sister Tara (Lola Kirke). Meanwhile, Tara is dealing with relationship issues of her own as she slowly slips away from her boyfriend Martin (Ben Mendelsohn), who gave up his Australian fame as a rock ‘n’ roll god to be with her. Her way of acting out is to lose herself in religion and seek solace in a charismatic Rabbi (Billy Crystal). This is who they've all been so far but do they have the courage to find out who they really are?