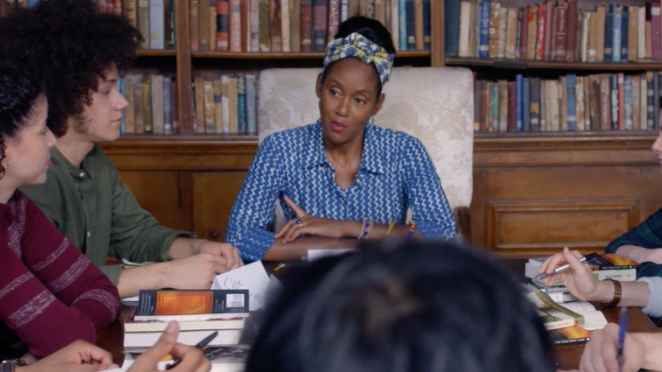 03 Jun The Boston Globe: In ‘1 Angry Black Man,’ Lessons that Extend Very Far Beyond the Classroom

More a dramatized seminar than a movie in the traditional sense, “1 Angry Black Man” nevertheless arrives on video streaming platforms at the best worst possible time. Black men lie murdered by police, cities are burning, the country’s racial injustices have never been plainer to see even by whites. Menelek Lumumba’s film takes place in academia, over the course of one Black Literature college class with a diverse array of students, but over the course of its 90-plus minutes, the roar of unrest becomes deafening.

The movie’s a well-mounted low-budget production, with dialogue that sometimes trips earnestly over itself and performances that range from professional level to pretty good high school. The setup is essentially “12 Angry Men” — thus the title — with 11 students and one professor discussing a handful of African-American literary classics and the issues they raise, for their authors in their lifetime and for America today.

The teacher, Carla (Daphne Danielle), is righteous, caring, committed, and smart, and you sense she’s been guiding this particular group of students to articulate their thoughts amid debate for the better part of the semester. The works under review include Zora Neale Hurston’s “Their Eyes Were Watching God,” James Baldwin’s “The Fire Next Time,” and the “Pittsburgh Cycle” of playwright August Wilson; you come out of the movie wanting to head immediately to a library.

But amid the debates about why Hurston was ostracized by her literary peers or how Baldwin’s innate spirituality might provide a sturdier pulpit for Black readers than Ta-Nahesi Coates’s implicit atheism, there are more personal fault lines at play.

An opening prologue shows Michael (Keith Stone), the smartest kid in the class, being grilled at a police station regarding another student’s sexual assault; he’s quickly cleared of suspicion and freed, but he and we understand how close his life came to being destroyed and how few people would care. That knowledge sits smoldering inside Michael and serves as the film’s ever-tightening watch spring.

Around him, his friends and classmates trade insights and call each other out over blind spots with a mutual respect that seems like a lost virtue; as heated as the conversation becomes — and it turns very hot at times — the overriding tone is, for lack of a better word, collegial. Among the students of color are Mike’s presentation partner, Eddie (Ramon Nunez), brash lesbian Michelle (Dahiana Castro), and the quiet, affecting Kendra (Isi Laborde-Edozien). Across the table sit the white students: Jim (Mike Taylor), a sweet-natured jock who’s in over his head; Ellen (Elizabeth Saunders), an older woman with a mixed-race son; Maggie (Amanda Jane Stern), a fire-breathing upper-middle-class progressive; and Rachel (Danicah Waldo), a sorority girl working very, very hard to say and do the right thing.

“1 Angry Black Man” takes sides but gently (for the most part), and they’re not always the ones you expect. One of the most striking scenes involves the class’s lone Republican, a laid-back bro named Kyle (William W. Wallace), mounting a sharply cogent defense of free speech on campus and the necessity of allowing even hateful figures like right-wing provocateur Milo Yiannopoulos to speak their piece; when Maggie tries to enlist the Black students to her side, they roundly criticize her for using them as “props.” (As it stands, it’s hard for them to care about free speech when their physical freedom can hang on the whim of a cop.)

Lumumba writes better speeches than dialogue, and the dramatic moments that punctuate “1 Angry Black Man” alternate between compelling and forced (especially true of one late-inning revelation). It’s not a great movie or a brilliantly made one, but it is bursting with heart and mind, and it lands especially on schedule for white viewers trying to articulate their own stances and best approaches to allyship. (And, as mentioned, it doubles as a decent intro-course reading list.) Not that Lumumba is letting anyone off the hook or has to: The sounds of riot that occasionally well up on the soundtrack are still there when you turn off the TV. Read Baldwin if you already haven’t, but we don’t have to wait for next time. Once again, the fire is now.