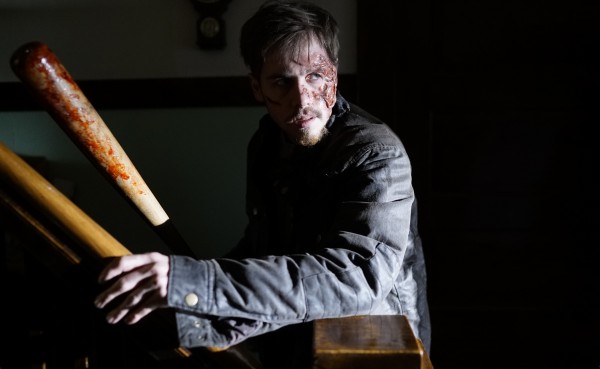 05 Oct ‘Knuckleball’ Review: Kid vs. The Killer Next Door Makes for a Lean, Mean Survival Thriller

Posted at 23:15h in News by Michael Hetnal

Imagine if Home Alone was rated R, the folks breaking in were psychopathic killers, and Kevin McCallister was maybe a bit of a psychopath himself, and you’re on the right track of what to expect from the lean, mean Canadian thriller Knuckleball. It’s a little reductive as a description, sure, but its an effective shorthand for the survival thriller from director Michael Peterson, which follows a young boy through a brutal fight for survival against the psycho killer next door.

Henry (Channel Zero‘s Luca Villacis) isn’t too pleased about spending the weekend with his grandfather, Jacob (Michael Ironside). The two aren’t close, and far from a beacon of paternal warmth, grandpa is a cantankerous, codgy tough guy who lives out in the sticks. With a snow storm on the horizon and his phone charger forgotten at home, Henry’s about to be locked in with a grumpy old dude for days, and he’s openly perturbed about it. And his mom isn’t that stoked on it either. Dropping Henry off, she confesses memories of her mother’s suicide to her husband, a dark secret she kept to herself all these years. Suffice it to say, something is rotten in Denmark (or the snowy wilds of Canada, as it were), and that’s before the creepy as hell neighbor, Dixon (Munro Chambers) makes his presence known.