Posted at 22:06h in News by Michael Hetnal 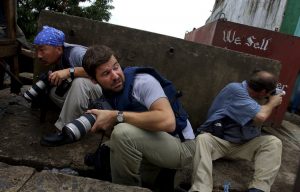 In the documentary “Hondros,” Greg Campbell draws upon decades’ worth of materials to help portray his friend and colleague Chris Hondros’s brilliance and humanity

War-zone journalists are a stubborn, audacious lot, and photojournalist Chris Hondros proved especially prolific, covering the world’s major conflicts, mostly with Getty Images, starting in the 1990s. In 2011 in Libya, at a time when he was contemplating moderating his intense and dangerous career, he shot pictures moments before he was killed by a mortar attack.

Directing the documentary Hondros, his childhood friend and colleague Greg Campbell has drawn upon decades’ worth of images, video, and amity. The result stands as a testament not only to Hondros’s journalism, but also his humanity.

Hondros’s work began with his school newspaper and later at an American daily, but it was his breathtaking photos of war victims, soldiers, and protesters — a few that became iconic and may even have altered history — that earned him accolades. His compositions are carefully balanced, making the calamities he captured all the more disorienting and devastating — a wailing kindergarten-age Iraqi girl covered in her mother’s blood, an armed teenage Liberian rebel leaping in triumph, a tiny Afghan child forlorn amid the ruins of a whitewashed Kabul palace.

But what most distinguishes Hondros’s work is his compassion. After his shot of that young Liberian, Joseph Duo, made him famous, Hondros tracked down the subject and helped him secure an education and meaningful work. In an era when the propaganda machines of conflicts like Syria are imperiling photojournalists’ work all the more, Campbell’s homage to his friend is a thorough look at a straight shooter.

Watch the trailer below. More information is available at the official film site.