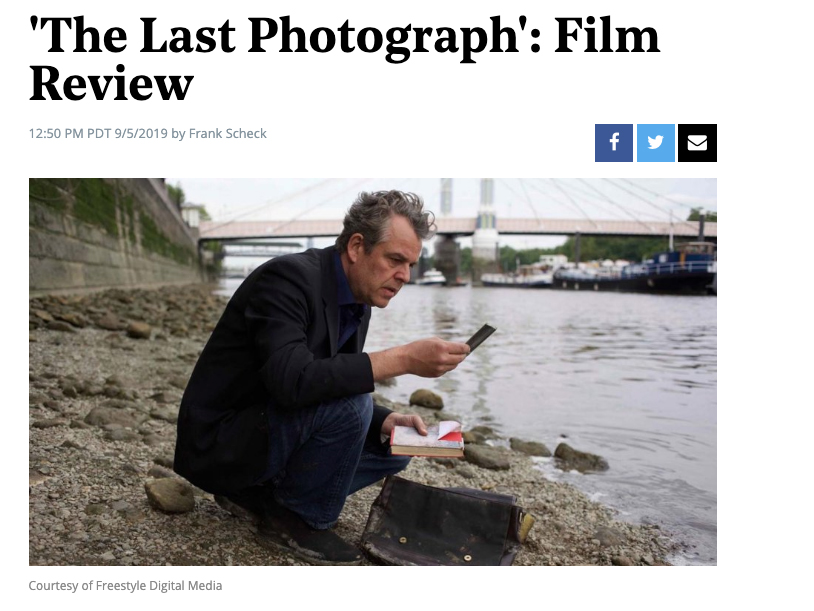 The bottom line: A moving elegy in a minor key.

Danny Huston directs and stars in this drama about a man desperately searching for a stolen photograph of him and his dead son.

Danny Huston returns to the director’s chair for the first time in more than two decades with this indie drama in which he stars as a man desperately searching for a stolen photograph of him and his late son. Too often relegated to stock villainous roles in his acting career (such as in the current Angel Has Fallen), Huston delivers a powerful performance in this stylistically audacious effort. While The Last Photograph ultimately feels too narratively slight to justify even its brief 85-minute running time, the intriguing film demonstrates that the actor should follow in his legendary father’s directorial footsteps more often.

Simon Astaire’s screenplay, based on his novel, revolves around middle-aged Tom Hammond (Huston), who when first seen is driving his son Luke (Jonah Hauer-King) to the airport for a flight from London to New York City. We eventually learn that the fateful flight was 1988’s Pan Am 103, which was destroyed in a bomb blast over Lockerbie, Scotland, resulting in the deaths of everyone onboard.

Much of the story takes place 15 years later when Tom, formerly a hard-driving businessman, has a new life running a small bookstore in London’s Chelsea neighborhood. That the tragic loss still affects him deeply becomes immediately evident with his arrogant demeanor toward a man who’s simply sitting at a table in front of his shop. He’s equally dismissive to Hannah (Sarita Choudhury), who runs a café next door.

Tom’s life is unexpectedly thrown into turmoil when his briefcase is stolen from the shop. The bag contains the last photograph of him and his son, taken at a Christmas party just days before the latter’s death. The bereaved father desperately searches for the stolen bag, which he hopes will have been discarded by the thieves after they’ve taken the cash inside. In the process, he remembers past events relating to the tragedy, rendered in a series of flashbacks that also include scenes depicting Luke’s burgeoning romance with Kate (Stacy Martin), the young American woman he was flying to New York to see.

While the latter episodes feel like time-fillers, a more moving plot element involves the tender relationship that develops between Tom and Hannah as he’s dealing with the loss of the photograph. Huston and Choudhury work beautifully together in these affecting scenes, the latter displaying the alluring charm first seen in 1991’s Mississippi Masala.

It’s often awkward to inject a real-life tragedy into a fictional narrative. It’s a pitfall that The LastPhotograph doesn’t entirely avoid with its use of real-life news footage documenting the event, which may prove disturbing to any viewers whose lives were actually affected by the terrorist attack.

That said, the film presents a compelling portrait of mourning and guilt, with Huston delivering a shattering performance as the father who still blames himself for his son’s death because he purchased the airplane ticket. There’s a haunting scene in which we see Tom dropping Luke off at the airport, their goodbyes necessarily rushed because of a policeman hovering nearby. In the process, Tom is unable to give Luke his Christmas present, a blue sweater that becomes a totemic object representing his grief.

Various directorial flourishes, including visual and sound distortions, effectively delineate the various timelines. But the film’s real impact stems from the charismatic Huston’s alternately tightly restrained and highly emotive performance that keeps you fully immersed in his character’s emotional turmoil. It makes you wish that he would direct more, not only because he’s talented in that regard but also so he could give himself more complex, fully dimensional roles to play.