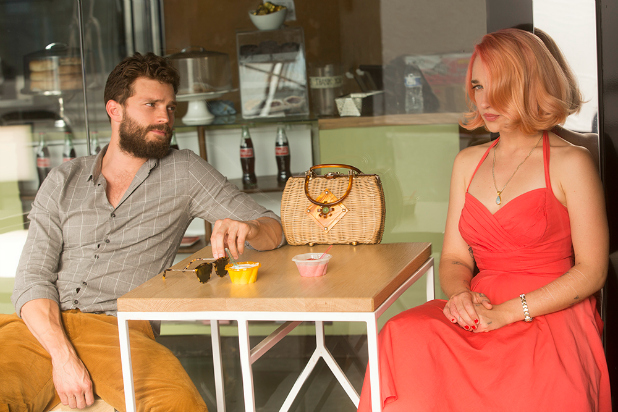 Posted at 17:09h in News by Michael Hetnal

Authenticity of experience, and the pitfalls of its allure, are at the heart of writer-director Emma Forrest’s debut feature “Untogether,” a tart, compelling romantic snarl about the iffy relationships a pair of tensely supportive sisters — played by real-life sibs Jemima Kirke and Lola Kirke — have with a couple of emotionally challenged men played by Jamie Dornan and Ben Mendelsohn.

A showbiz-adjacent story set in tucked-away hills of Los Angeles that become a neurosis-wallowing refuge for its quartet of characters, “Untogether” at its chill, observant best resembles what a left coast, smart-satiric-serious kind of romantic comedy might look like going forward as we wean ourselves of the influence a certain bespectacled, controversial New York comic auteur has had over the genre for decades.

When we meet Andrea (Jemima Kirke) and Nick (Dornan), they’re engaged in some amusingly uneven sex indicative of their respective positions in life: he’s a hotshot doctor whose time in the Middle East inspired a bestselling memoir of doomed romance, whose post-coital power move is to say things like, “You’re not going to get obsessed with me, are you?” She’s an acid-witted onetime writing prodigy and recovering addict years from her brief burst of authorial fame, and living with her younger massage therapist sister Tara (Lola Kirke) while she figures it all out.

Andrea (who sports pink hair and a meticulous vintage-apparel look) and the blasé Nick grasp that theirs is an elongated fling with potential, but as long as Nick enjoys his notoriety and Andrea struggles to stave off self-destruction and invite creativity back in, periodic trysts — usually spiced up by her dancing for him — will have to do.

Tara’s battle, on the other hand, is between waning interest in her older boyfriend Martin (Mendelsohn), an Australian rock singer who left Down Under stardom behind to be with her in LA, and newfound curiosity in her never-cultivated Jewishness. The latter is sparked by one of her customers, an activist rabbi (Billy Crystal) who charms Tara into attending services at his progressive temple.

As this storyline plays out — with Crystal in fine form blending comic timing and mentor-ish sincerity, and Jennifer Grey hovering watchfully as Crystal’s wife — it becomes patently obvious where the psychological fault lines are in Tara’s approach to her religious conversion. But it’s still an amusing take on the escape-route mentalities of the romantically disillusioned.

One’s rooting interest in the primary foursome — as “Untogether” unspools, opens wounds, and spills one character’s big secret — is always threatened, however, by a nagging sense that Forrest assumes her own fascination with her desperate souls will naturally be yours, too. The truth is that nobody here is especially likable, but Forrest at least has a knack for mining a given thorny situation — Andrea crashing a fancy book party, Tara’s awkwardness as a new temple-goer, a humiliating turn of events for Nick — for not just an illuminatingly off-center barb or reactive one-liner, but also the unexpected sensitivity that takes us inside someone’s pain.

The cast does its part to keep everyone’s defensive prickliness within the realm of interesting, particularly “Girls” alumna Jemima Kirke — hers is a tricky portrayal of bruised smarts, a solid leap after graduating from the HBO show — and Mendelsohn, who late in the film nails both an initially nervous, then freeing club performance with his reunited two-hit-wonder band and the complicated feelings afterwards. Though it’s millennial angst that drives the Andrea/Tara trajectories, Mendelsohn’s portrait of midlife fragility is a strong coloring in “Untogether.” Much like the shrewd casting of real-life sisters to play on-camera siblings, Forrest’s understanding of Mendelsohn’s gifts comes with family history: the actor is also her ex-husband.

But is it also noteworthy, perhaps, to point out that one of the more unusually refreshing pleasures in “Untogether” is that its leads all act in their native accents, from the soft Irish lilt of Dornan’s delivery (this wooden “Fifty Shades” star’s best turn in a while) to Mendelsohn’s laid-back Aussie-ness? Even the Kirkes’ accents reflect their own situation: Jemima’s vinegary voice reflects her mostly British early upbringing, while Lola’s betrays someone who’s lived in America a lot longer than her sister has. Forrest’s decision to forego ubiquitous American tongues for the naturalness of what her actors already have to offer acts, oddly enough, as an appropriate undercurrent to her movie’s own interest in characters revealing who they really are in order to move forward.